To Vape? or not To Vape? That is the Question 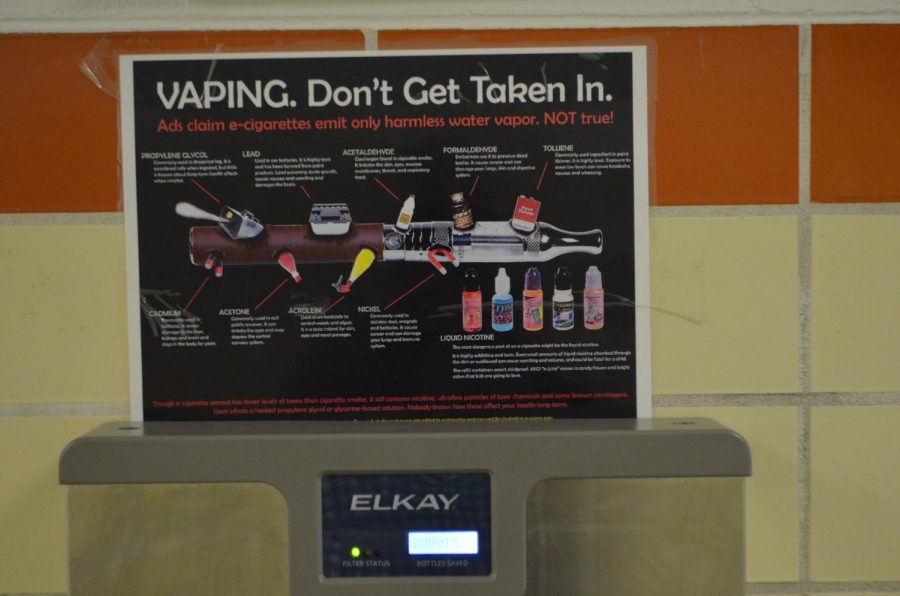 Anti-Vaping signs like this can be found in the hallways and restrooms of LHS.

As some of you may know, high schools around the world are battling a new epidemic among teenagers: vaping. Year after year vaping has dramatically increased among high school students.

In order to get a sense of how much vaping is occurring among Lakeview High School students, this reporter posted a survey that students could respond to anonymously. Response was immediate and abundant. Just over 50% of the current LHS student population responded to the survey.

The survey came back with pretty encouraging numbers. From the students that responded, 91.5% say they do not vape while the other 8.5% say they do vape.

Students do know many people who vape with 56% having close friends who vape and 31% having family members who vape.

Students have mixed responses about their willingness to be around others who are vaping with 55% being okay with vaping taking place in their presence and 45% taking steps to leave the area when others begin vaping.

As far as addiction to vaping is concerned, only 35% believe their family and friends who vape have developed an addiction, but another 36% are concerned that addiction may become an issue.

Overall, the responses come together to agree that vaping is a horrible thing that students should not even start.

An anonymous sophomore said, “I think they are dumb and shouldn’t do it, but it’s their choice and if they want to put themselves at that risk it’s their decision.”

Another sophomore added, “It is not good. It is extremely dangerous and can get kids addicted from a young age. I would never do that or any other drugs.”

An anonymous junior said, “I have vaped before, but it’s nothing I would do consistently. It’s bad for you and addictive and I’m not willing to risk my life for it.”

Some students gave specific reasons for not vaping. One senior responded, “I’m an athlete so it’s not an option.”

Furthermore, 74.1% of the respondents picked disgusting as an adjective to describe vaping.

A variety of reasons were given by students who admitted to vaping.

One freshman said, “Love it.”

Another freshman said, “Love it, makes me feel like a rebel.”

Most of the respondents that agree with vaping say it helps with stress. With 47.8% saying stress is the cause. A junior responded with, “I mean it’s not a big part of me I just do it when I get stressed with home life and schoolwork.”

Students were also asked if they knew the effect of vaping on the body and the majority do. They know what it can do to your lungs, your body in general, premature aging, and others. “Vaping can deliver toxic metals like nickel, lead, and chromium into your lungs and can cause permanent damage. it can also cause you to age prematurely,” a freshman responded.

Most answers included some form of the above quote with only 4 students giving an “I don’t care” type of answer.

Overall, the general consensus is that vaping is bad and not good for your body and can leave long-lasting effects. Underage vaping should not occur!